Today is one of those hard-to-leave-the-house-because-I’m-afraid-of-weird-and/or-unlikely-stuff days.  Here is a short list of some of the things I am anxious about that may happen if I leave my apartment:

Some of these fears, as you see, are more likely to come to pass and are more dire than others, but my mind manages to rotate through all of them at such a pace that they all seem equally plausible and horrifying.  These fears live in a part of my brain ruled by The Blob.  The Blob is grey and always vaguely anxious and looks, coincidentally, like one of the ghosts from Pac-man:

The Blob is very well-meaning: he (or it?) just wants me to be prepared for any and all contingencies.  Unfortunately, when he’s in top form, his preferred form of preparation is for me to stay in the apartment and never leave.  This is not feasible, and so, on days like today, I have to use all the tools in my arsenal to get him to chill out.  Despite his constant yammering in my head since I woke up, I have managed to leave my apartment TWICE already and am planning to go out a third time – for a social engagement, no less, with, like, three other people!  What’s more, I’m meeting them in a restaurant that I have NEVER BEEN TO BEFORE, which is sort of a huge deal because new restaurants usually have Ebola (I’m pretty sure that’s science).

So how do I do it?  I’m not a superhero, and I have ZERO judgment for people who don’t manage to do it (there are days when I can’t, myself), but here are some coping strategies I have adopted throughout the years that help:

The best part of my coping strategies is that their effects are cumulative – the more often I manage to overcome The Blob and get out of the house, the (usually) more positive examples I have of good outcomes to look back on the next time I’m dealing with general or social anxiety!  Don’t get me wrong: I’ll always be something of a homebody, but on days like today I’m proud of myself for taking the leap…and leaving my apartment.  Anyone else have good coping strategies to share?  I’m always looking for more!

Well, only two hours to go until I leave for dinner!  Time to go pack my purse, get some work done, and research the temperature at 8 pm tonight in the Mission 🙂 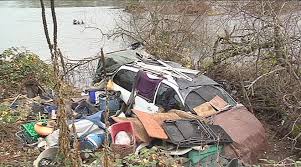 Just kidding, my actual apartment is a Toyota Sienna, which is much classier and gets better gas mileage.*

Seriously, though, as I wrote in a post last week, I have this personal demon (WITH RIPPED ABS UGHH) who lives in my head who was being louder and meaner to me than usual because I decided to quit my job.  Part of the demon’s argument against this action was that I would immediately become super poor and end up living, quite literally, in a van down by the river.  It is a small victory over him that ten days into my unemployment adventure, I have not been evicted AND I received a bunch of amazing encouragement from friends, family, and random internet people on my last post.  I expected most people to react to: “Hey, I quit my job and I’m trying to write a book!” with this expression:

Instead, I received tons of emails, messages, and in person comments that all pretty much boiled down to “Good for you!  God, I wish I could quit my job, too.  Jobs are terrible.  Hmm, maybe I should play the lottery.  Hold on, brb, I have to run to the convenience store.  But yeah, you’re great, SCREW THE MAN!  What’s your lucky number, again?”  I wish you all good luck with those lottery tickets, by the way, and hereby stake a claim to 10% of all winnings.

Seriously, this week has been a pretty incredible high, which means, of course, that I’m likely going to come crashing down to earth sometime in the next five to ten days.  It’s how the demon in my brain works (thanks, mental illness!).  To prevent this, I’m trying to cultivate another part of myself that I drew with my therapist’s guidance (IT REALLY DOES WORK).  She looks like this:

This is another younger part of me (who apparently was a big fan of knee socks and had reddish hair?  Whatever), but unlike my personal demon, she is confident and does not. Give. A. Shit. About. Anything.  I drew her after my mother told me, for the thousandth time, that I was a super happy, not-depressed, confident child before puberty (pro tip: contrary to what society would like you to think, getting boobs in the fourth grade does NOT lead to increased self-esteem), at which time the shit really hit the fan.

Now, it’s totally natural for things to go down the toilet once you hit puberty – your body is weird, your hormones are out of control, and since this is happening to everyone in your school at approximately the same time, your social life becomes an insane CW-style soap-opera complete with sexual harassment and illicit substance use.  For me, though, puberty also marked the onset of what has been a lifelong struggle with depression and anxiety.  Almost all vestiges of confidence that I had in my abilities, my appearance, even my intelligence disappeared almost overnight.  I struggled through by focusing on getting 100% on every test, winning every award I could, getting into a top college, getting the best job, blah blah blah.  Ironically, it’s only now when I’m finally jumping off the high-achiever train that I’m starting to remember Awesome Girl.  She’s the girl who used to play rec basketball every winter and loved it, despite never making a basket in four years.  She’s the girl who spent every Thanksgiving break pretending to be the captain of the Mayflower and ordering her little brother and cousins around the basement, telling them to swab the decks, raise the sails, and keep an eye out for Plymouth Rock.  She’s the girl who wore leggings and a giant jumper with a Disney Princess on it to school and thought, “I AM a princess, and you better fucking believe it.”

Of course, this girl didn’t have any bills to pay and had no true understanding of the Middle East quagmire (to be fair, who does?).  It’s easy to be the queen of the world when the world is your home, your parents, your brother, and your little group of friends.  I’m not aiming to be the queen of the world, but I do want to recapture a bit of the essence of what made Awesome Girl so awesome – she was less prone to worry, and more likely to celebrate.  She’s the complete antithesis of the demon, and it’s my goal this week to remember and celebrate her a little bit every day.  If you’re reading this, I hope you can take a minute to remember a time when you felt on top of the world – it might not have been when you were a child, and it might be hard to remember it at all, but it’s worth the effort to try.

Now, I’m going to go write another thousand words of my book BECAUSE I AM AWESOME, BITCHES.

*In the interest of full disclosure, I should say that I don’t know whether or not the Toyota Sienna is classier or gets better gas mileage than any other van on the market.  Chrysler, please don’t sue me.  Toyota: if you think your van IS better than others on the market, I’m happy to do a test drive and write a post all about it.  For a price.  My price is one million American dollars.  It’s a worthwhile investment, I promise.

My Tweets
© Jaclyn Opritza and justkiddingnobutseriously.com, 2015. Unauthorized use and/or duplication of this material without express and written permission from this site’s author and/or owner is strictly prohibited.
Luke Atkins

The World Of Anand

a community for women who work

writes a short story every week

Because someone my age and my size still likes to look cute!

Tales from the Cabbage Patch

Because everyone wonders where they came from

Welcome To My Perfectly Imperfect World

The world's most entertaining literary blog!

Because we speak a language all our own.

Toast and Tea
A place to express ... digest ... relax and read ... a place to escape and breathe.
Traveling Rockhopper

A blog full of humorous and poignant observations.